The Cubic lattice network is the most commonly used pore network topology by far. When people first learn about pore network modeling they often insist on creating networks that are topologically equivalent or representative of the real network (i.e. random networks extracted from tomography images). In reality, however, a simple cubic network provides a very passable representation of more complex topologies, and provides several additional benefits as well; namely they are much easier to visualize, and applying boundary conditions is easier since the faces of the network are flat.

The examples below will demonstrate how to create various cubic lattice networks in OpenPNM using the Cubic class, as well as illustrating a few topological manipulations that can be performed, such as adding boundary pores, and trimming throats to create a more random-like topology.

Let’s start with the most basic cubic lattice:

In this case pn will be a 10 x 10 x 10 cube with each pore spaced 1 unit away from it’s neighbors in all directions. Each pore is connected to the 6 neighbors adjacent to each face of the cubic lattice site in which it sits. The image below illustrates the resulting network with pores shown as white spheres, along with a zoomed in view of the internals, showing the connectivity of the pores. 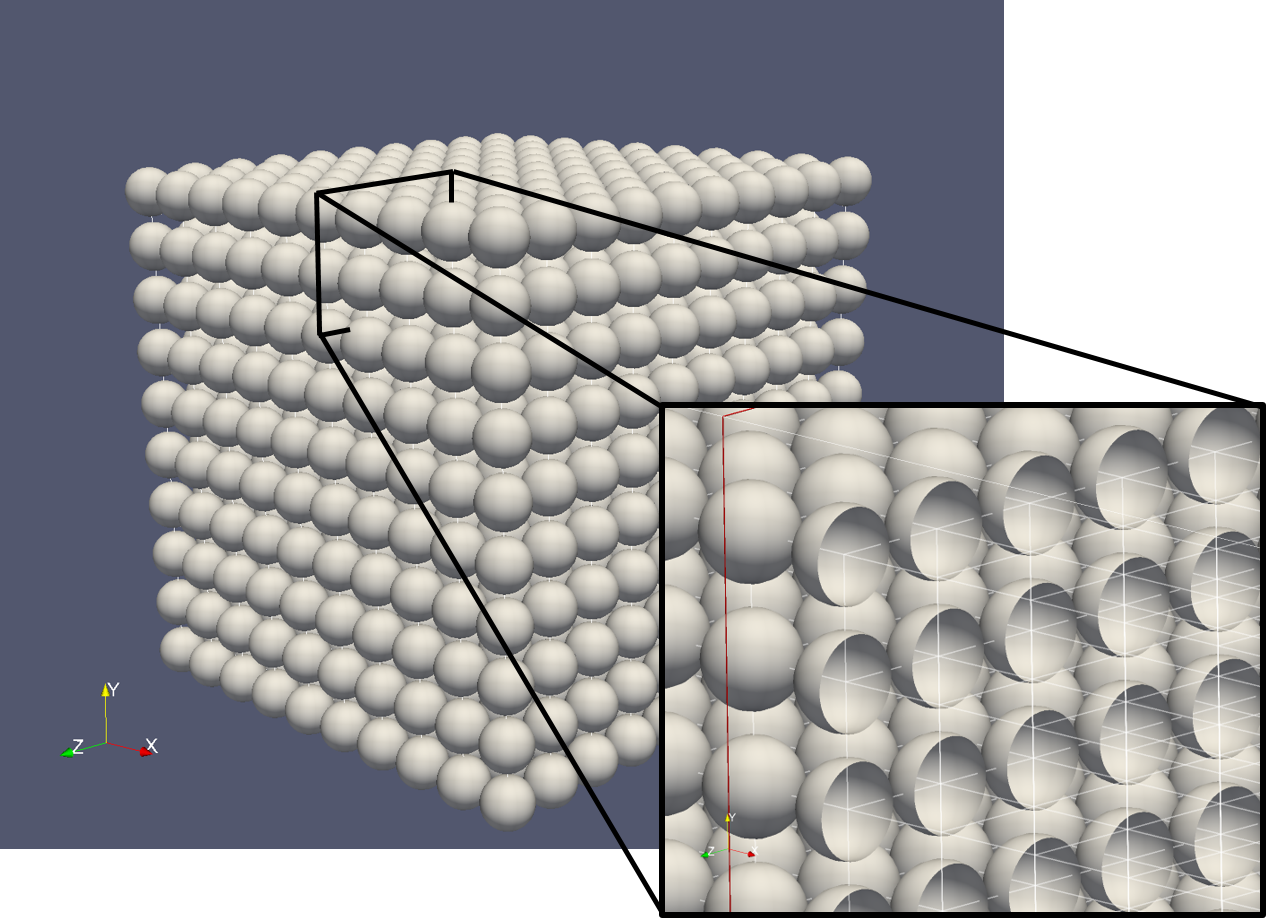 The Cubic network generator applies 6-connectivity by default, but different values can be specified. In a cubic lattice, each pore can have up to 26 neighbors: 6 on each face, 8 on each corner, and 12 on each edge. This is illustrated in the image below.

Cubic networks can have any combination of corners, edges, and faces, which is controlled with the connectivity argument by specifying the total number of neighbors (6, 14, 18, 20, or 26). Note that 8 and 12 are not permitted since these lead to disconnected networks.

This yields the following network, which clearly has a LOT of connections! 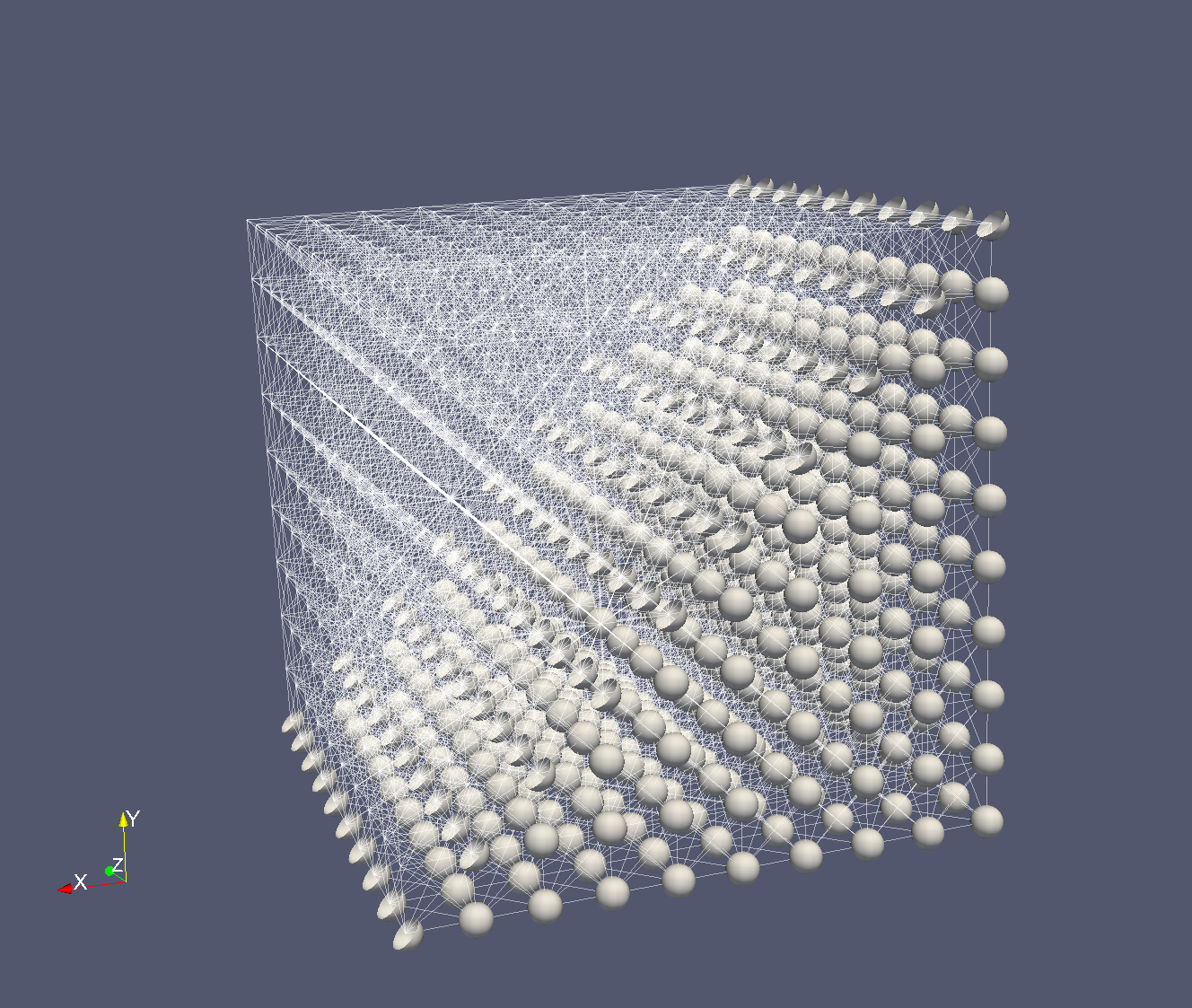 Often it is desired to create a distribution of coordination numbers on each pore, such that some pores have 2 neighbors and other have 8, while the overall average may be around 5. It is computationally very challenging to specify a specific distribution, but OpenPNM does allow you to create a network with a specific average connectivity. This is done by creating a network with far more connections than needed (say 26), then trimming some fraction of throats from the network to reduce the coordination.

The most basic way to do this is to just trim arbitrary throats as shown below, but this can lead to problems of accidentally creating isolated and disconnected clusters.

The following image shows histogram of the pore connectivity before and after trimming. Before trimming the coordination numbers fall into 4 distinct bins depending on where the pores lies (internal, face, edge or corner), while after trimming the coordination numbers show some distribution around their original values. If the trimming is too aggressive, OpenPNM might report an error message saying that isolated pores exist, which means that some regions of the network are now disconnected from the main network due to a lack of connected throats.

In order to allow more aggressive trimming without creating topological problems, OpenPNM offers a tool in the topotools module called reduce_coordination, which accepts an average coordination number. This function works by first computing the minimum-spanning tree of the network (which is a set of connections that ensures every pore is connected), then deletes throats that are NOT part of the spanning tree to ensure that connection is maintained.

The shape and spacing arguments can of course be adjusted to create domains other than simple cubes: 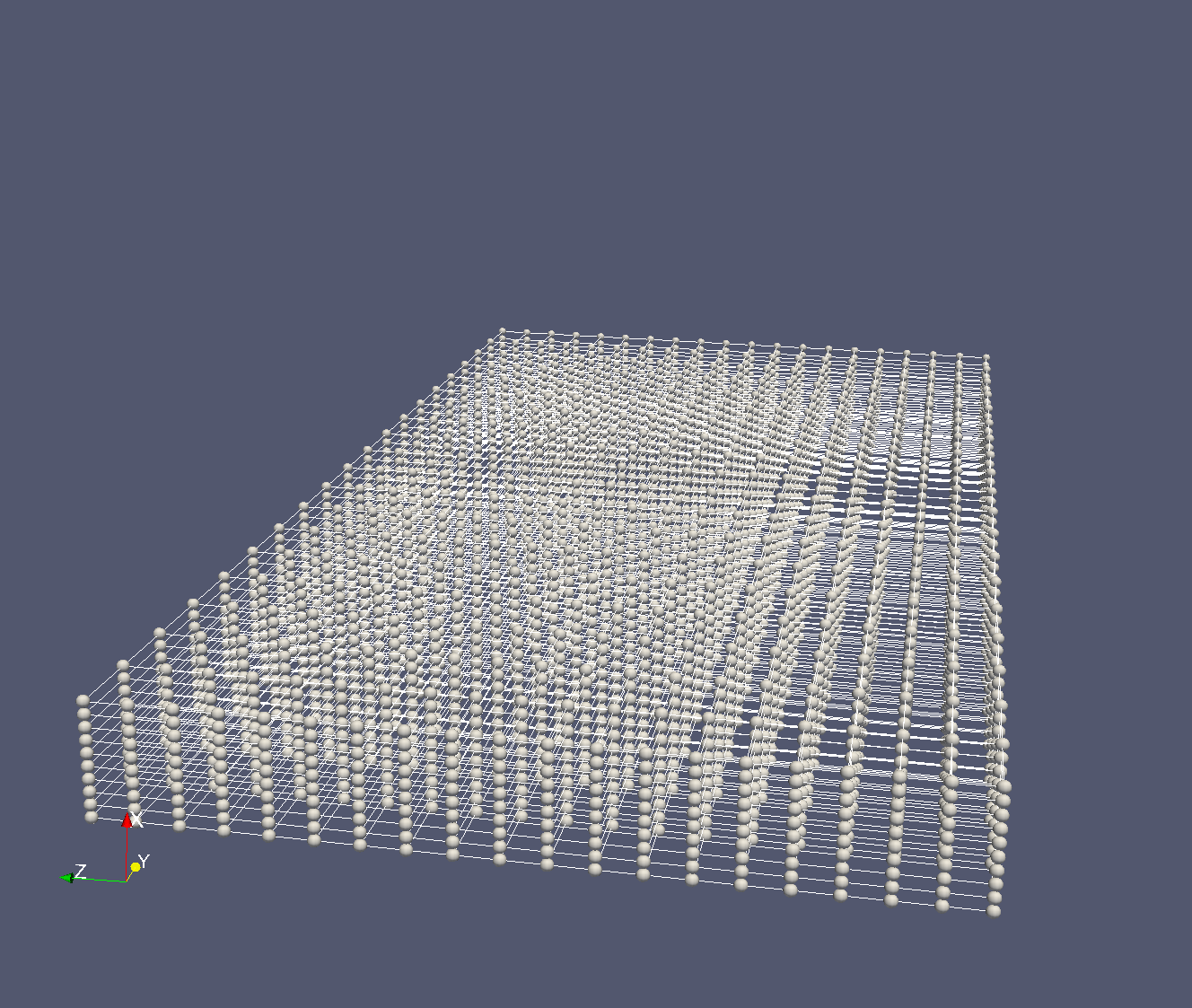 Spherical and Other Arbitrary Domains#

It’s also possible to obtain cubic networks of arbitrary shapes (i.e. spheres), but still with cubic connectivity. This is accomplished using the CubicTemplate class, which accepts a binary image of 1’s and 0’s. The network will have pores where the 1’s are and 0’s elsewhere. For instance, to make a spherical domain for a catalyst pellet, generate an image of a sphere using Scipy’s NDimage module, the pass this image to Cubic as follows:

This results in the following: 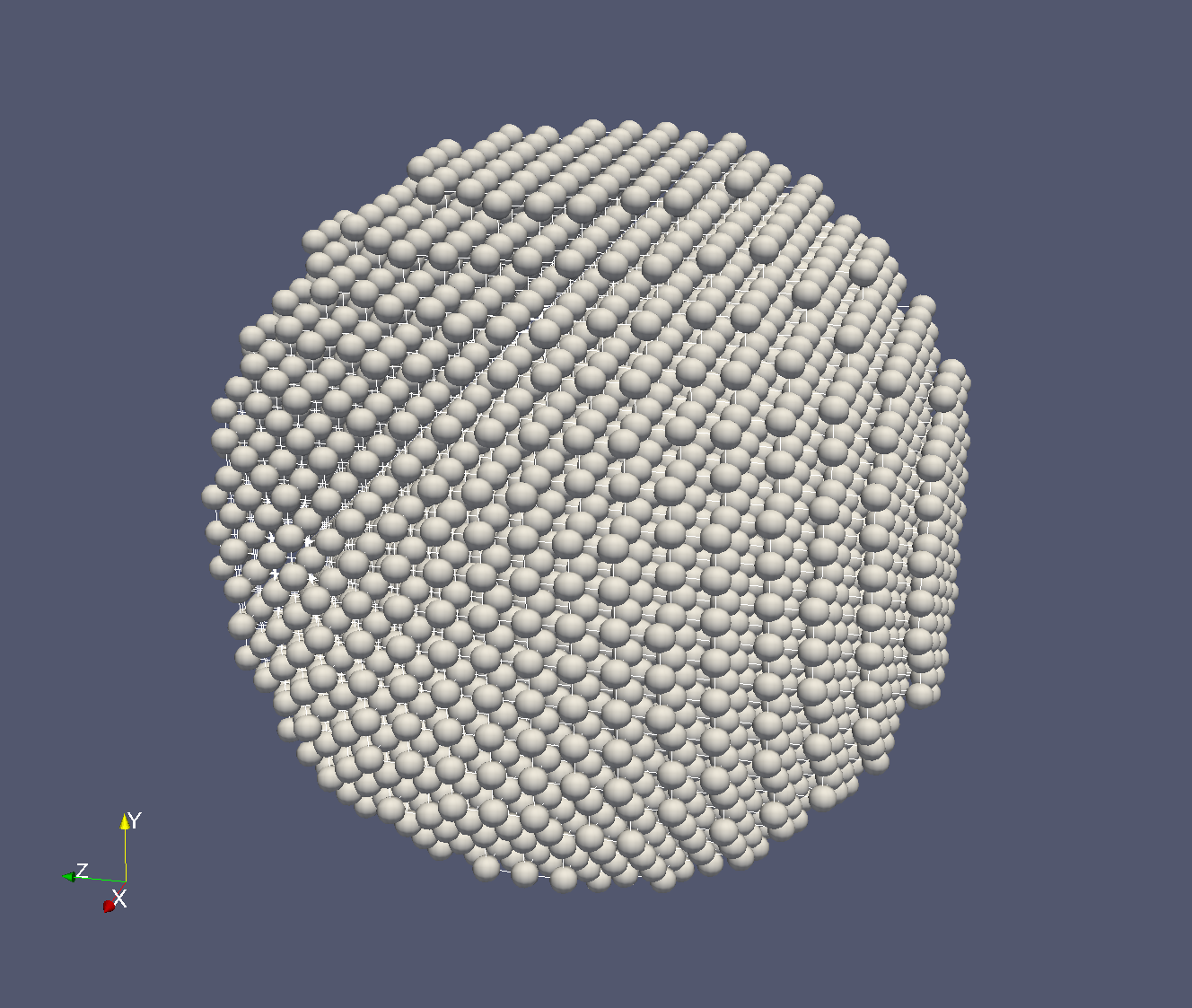 All images of networks were made with paraview by exporting a VTK file with the following command: